Khilola’s Review of Dealing with China

…back to Khilola & Friends Must Reads 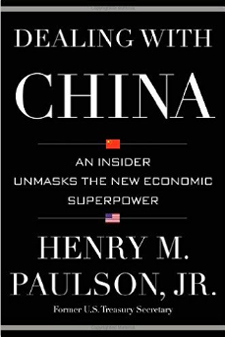 Many policy students would have heard or read about Henry M. Paulson as U.S. Treasury Secretary who served under George W. Bush. Paulson was among the key policymakers who orchestrated the rescue of Bear Stearns, and the bailouts of Fannie and Freddie Mac, AIG, Citi and other troubled financial institutions in the US.

Yet, prior to his tenure as U.S. Treasury Secretary, Paulson held multiple senior leadership roles at Goldman Sachs, most recently as Chief Executive Officer. What is interesting about his time at Goldman, among other things, are the business and political connections he developed in China. Paulson’s book, “Dealing with China: An Insider Unmasks the New Economic Superpower” is a recollection of his on the ground experiences of doing business in China, particularly the political relationships he has had to cultivate in order for Goldman’s investment banking business to succeed.

The book is divided into three sections:

In addition to policy analysis and the chronology of China’s financial sector reforms, Paulson’s book is also full of observations and biographical details about key Chinese government officials and China’s business elite. Referring to Jiang Zemin and Xi Jinping as “old friends” Paulson discusses how these individuals have been instrumental for his success while at Goldman, but also how his relationship with them has helped advance more constructive bilateral policy discussions while he was serving in President George W. Bush’s administration.

Paulson’s central message in the book is that business and policymakers will have to get accustomed to face an ever rising China, and to succeed, one has to focus on practical, constructive cooperation as opposed to idealistic rhetoric about how China’s political and economic system is ought to function. He argues that due to the nature of their inter-dependent trade relations, the US has an imminent self-interest in China’s success. For other western states, China is also important, because, it will be impossible, to tackle global challenges such as climate change, financial stability, infrastructure development, food and nuclear security without working closely with the Chinese.