Indigenous Peoples – A Guide to Terminology

… an Atlas resource page in Governance and Institutions and Atlas100 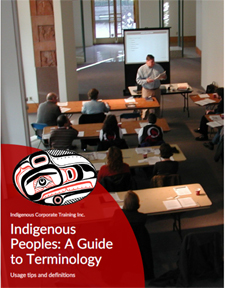 Bob Joseph, founder of Indigenous Corporate Training Inc., has produced an e-book (pdf on right) to provide some perspective on historical, political and community terminology, plus some definitions of common terms as well as tips regarding usage.

What is the definition of Indigenous Peoples?

“Before we begin, a bit of context….the First Peoples of this land now known as Canada formerly had unique communities with unique names – there wasn’t a need for collective nouns or complicated terminology. With European contact and ensuing colonization, the government required people to be defined and labeled for ease of governing.

“In Canada, we seem to be using a definition of Indigenous Peoples that mirrors the constitutional terminology of Aboriginal Peoples as stated in Section 35 that includes the Indian, Inuit, and Metis Peoples. So when it comes to these two terms what’s the best terminology? As always, my favorite answer is “it depends.” It really depends on which hat people are wearing.

“What about the provinces? Had you asked me a few years ago which province in Canada would be the first to go with the terminology “Indigenous Peoples” I wouldn’t have picked Alberta but we now see that province going with this term. In Ontario recently we saw the Government of Ontario change the name of its ministry to Indigenous Relations and Reconciliation, signaling a direction from that province. Manitoba First Nations leadership has stated on occasion that they would be interested in dealing with anybody who referred to them as Indigenous peoples.