Leslie Pal (reference below) describes when using direct provision may be the appropriate policy response.

“Governments can decide to achieve the conditions or service goals they have in mind by marshalling their own resources toward those ends. A good example is education. Parents need to have their children educated, but governments can elect to provide that education directly through a staterun system or to provide parents with the funds (usually through some form of voucher) that they can then redeem for services as they see fit, from either government providers, the private sector, or some mix. Any service directly provided by government, from garbage collection to education, will involve the expenditure of often very substantial amounts of money. In 2009 (latest data), for example, provincial and territorial governments spent a total of $259 billion on health ($115.5 billion), social services ($61.7 billion), and education ($81.8 billion). These combined amounts represented 74 percent of total expenditures of the governments in that year (Statistics Canada, 2009). 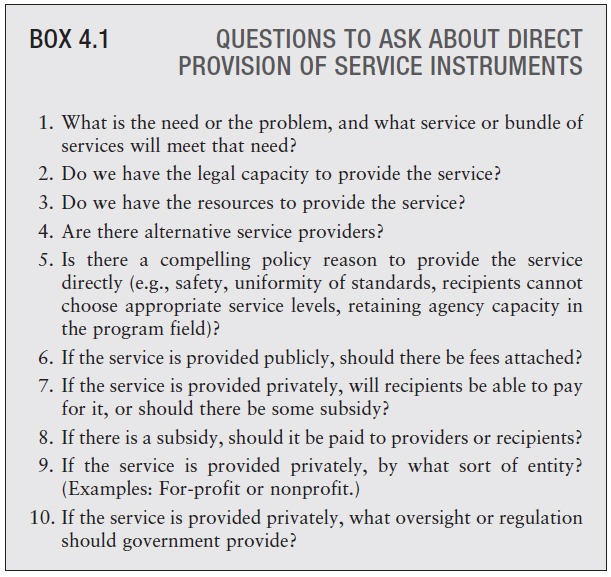 “The nub of the issue is in questions 4 and 5. Are there alternative service providers? Absolutely. The garbage business in North America is huge. What is the compelling policy reason to directly collect garbage with city workers rather than through a contract for service with a private company? Typically, the argument from public sector unions has been that the level of service (and the wages and working conditions of sanitary workers) will decline if private companies get into the act. Apart from that, most people care only that the can at the curbside is emptied weekly – this is essentially a question of efficiency. If public sector workers can collect the garbage as efficiently as a private sector company can, there usually is little reason to change.

“Question 6, however, has risen with a vengeance in recent years. As the costs of garbage collection and recycling have increased dramatically across North America, and as pressure to hold the line on taxes has mounted, more and more municipal governments have decided to charge some sort of fee for collection. Doing this can get quite creative, from charges per can or bag to limits on the number of bags one can put out. The logic in both cases is the same: what was once a “free” service now has a direct cost attached to it.

“The other questions deal with the ways in which government can either support or regulate the private provision of services. … alternative service delivery or some variant of the term has become an important issue in the implementation of public policy. More and more jurisdictions are answering question 4 in the affirmative, but question 5 in the negative, and then the game turns into one of deciding how to structure a private sector–public sector partnership. Another implementation issue is, if the service is to be provided through a public agency, how should that agency be designed? Should it be a direct-line department, or an arm’s-length entity like a public or Crown corporation?

“As the list of questions on service delivery suggests, governments can either provide the service directly or regulate the provision of the service by third parties, or they can do a mix of both. Policy instruments are not mutually exclusive but are usually combined in packages to deal with the different dimensions of the problem.”

Designing the Delivery Model (core topic) in Implementation and Delivery and Atlas107.