United Nations Declaration on the Rights of Indigenous Peoples (UNDRIP) 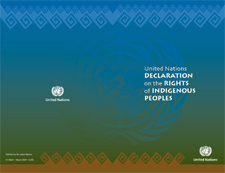 The United Nations Declaration on the Rights of Indigenous Peoples (UNDRIP) was adopted by the General Assembly on Thursday, 13 September 2007, by a majority of 144 states in favour, 4 votes against (Australia, Canada, New Zealand and the United States) and 11 abstentions (Azerbaijan, Bangladesh, Bhutan, Burundi, Colombia, Georgia, Kenya, Nigeria, Russian Federation, Samoa and Ukraine).

“The Canadian government said that while it supported the “spirit” of the declaration, it contained elements that were “fundamentally incompatible with Canada’s constitutional framework,” which includes both the Charter of Rights and Freedoms and Section 35, which enshrines aboriginal and treaty rights. In particular, the Canadian government had problems with Article 19 (which appears to require governments to secure the consent of indigenous peoples regarding matters of general public policy), and Articles 26 and 28 (which could allow for the re-opening or repudiation of historically settled land claims).

“Minister of Indian Affairs and Northern Development Chuck Strahl described the document as “unworkable in a Western democracy under a constitutional government.” Strahl elaborated, saying “In Canada, you are balancing individual rights vs. collective rights, and (this) document … has none of that. By signing on, you default to this document by saying that the only rights in play here are the rights of the First Nations. And, of course, in Canada, that’s inconsistent with our constitution.” He gave an example: “In Canada … you negotiate on this … because (native rights) don’t trump all other rights in the country. You need also to consider the people who have sometimes also lived on those lands for two or three hundred years, and have hunted and fished alongside the First Nations.”

“On 3 March 2010, in the Speech From the Throne, the Governor General of Canada announced that the government was moving to endorse the declaration. “We are a country with an Aboriginal heritage. A growing number of states have given qualified recognition to the United Nations Declaration on the Rights of Indigenous Peoples. Our Government will take steps to endorse this aspirational document in a manner fully consistent with Canada’s Constitution and laws.”

“On 12 November 2010, Canada officially endorsed the declaration but without changing its position that it was ‘aspirational’.”

In his December 2016 Speech to the Assembly of First Nations Special Chiefs Assembly Prime Minister Trudeau (reference below) stated:

“In May, Minister Bennett went to the UN to make clear our government’s unqualified support for the United Nations Declaration for the Rights of Indigenous Peoples.  We remain committed to its adoption and implementation in full partnership and in consultation with Indigenous Peoples.

“I have asked Minister Wilson-Raybould to lead the work collectively with her Cabinet colleagues and First Nations, the Métis Nation and Inuit Peoples to ensure that this gets done.”

In his 2009 book, A New Look at Canadian Indian Policy (reference below), Gordon Gibson, a former assistant to Prime Minister Pierre Elliott Trudeau and former leader of the Liberal Party of British Columbia, is highly critical of the Declaration:

“The current federal government has been much excoriated for refusing to affix the signature of Canada to the United Nations’ Declaration on the Rights of lndigenous Peoples (2007). … In fact, the position of Canada over the years has been quite consistent and, briefly put, holds that the Declaration has some serious conflicts with the Canadian Constitution and rulings and, if adopted, would throw the law into chaos. … To underline the importance of such agreements, recall the words of Chief Justice McLachlin of the SCC for the unanimous seven-judge bench in Health Services and Support [etc.] v. British Columbia, [2007): “The Charter should be presumed to provide at least as great a level of protection as found in the international human rights documents that Canada has ratified” (emphasis added). As the reader will see from the following, there is an excellent chance that adherence to this United Nations document, then to be read into the Charter by the Court, would have seriously destabilized the evolving pattern of Canadian law.

“The concepts of “indigenous peoples” and “inherent rights” are central to the Declaration itself. No definition or listing is given. In common parlance, this is signing a blank cheque. In the Declaration, indigenous rights are not merely individual; they are collective. No provision whatsoever is made for democratic or even good governance of the collective. Indigenous tyrannies may apply for UN blessing. Article 3 implies potential separation rights for indigenous peoples, though this is carefully obfuscated. Article 4 requires taxation (of the mainstream) without representation. Articles 5, 20, and 33 provide for a parallel society. Article 11 provides for retroactive compensation for things done “in violation of their laws, traditions and customs”. Article 18 provides for reserved seats in mainstream decision making bodies. Article 22 is so deliciously politically correct that it really is worth citation: “Particular attention shall be paid to the rights and special needs of indigenous elders, women, youth, children and persons with disabilities in the implementation of this Declaration.” Middle-aged male indigenes have a complaint. Article 26 again is worth citing because it is the main concern of the government of Canada: “Indigenous peoples have the right to the lands, territories and resources which they have traditionally owned, occupied or otherwise used or acquired.” Ottawa says this would over-ride established and ongoing processes.

“None of this is surprising if you know how the United Nations oper­ates. The reason there is no definition of an “indigenous” person, when that ought to be the very first line of text, is simple. The Asians and Africans absolutely vetoed it. The Chinese claim they have no indigenous peoples and the Indians and Pakistanis say they are all indigenous. The Africans are terrified of tribal schisms. ln a like way, giving a definition to “self-determination,” “peoples,” or “inherent rights” would have been dangerous to many countries. It is true that some of this language is used in the UN International Convention on Civil and Political Rights but there “peoples” are interchangeable with nation states or with liberating colonies. It is not an internal concept in that context.

“It is worth recalling that the United Nations is, inter alia, an assembly dominated by undemocratic states that have themselves no intention of abiding by rules they dislike but a great propensity to make rules for law­-abiding western nations. Adherence to this Declaration would immensely complicate a developing pattern of Canadian accommodation and should be resisted. Recall again that our Supreme Court is prone to importing inter­national law to guide us and that this Declaration is not in the usual “aspi­rational” language but rather the “rights” language of Conventions. Signing this would be a recipe for legal chaos and the bad, not the good, of Canadian Indians.”

In his presentation to the 2016 Walter Gordon Symposium, organized by the School of Public Policy and Governance and Massey College at the University of Toronto (reference below), former deputy minister of Indian Affairs and Northern Development Harry Swain offers the following perspective:

“Our new government has committed to implementing the 94 recommendations of the Truth and Reconciliation Commission, one of which is the United Nations Declaration on the Rights of Indigenous Peoples. UNDRIP was negotiated over 30 years and finally adopted in 2007. Its lengthy preamble and 46 articles lay out a series of collective and individual human rights that the world has decided should be the minimum enjoyed by indigenous peoples the world over. There is an excellent Handbook about it, written for the Indigenous Law Association by Prof. Brenda Gunn.

“But UNDRIP not without challenges. It is written, for example, in such high-flown and general language that it is sometimes difficult to figure out what it means, or whether or not Canada already meets the standard. In this it reflects the compromises and hard drafting necessary by indigenous leaders, advocates, bureaucrats and diplomats coming from widely disparate countries, each with its own sacred cows (and sins) to protect. But legislation (I include the accompanying regulations) requires precision, and detail. With all due respect to the process that gave rise to the Declaration, there are some quite important ambiguities that would have to be resolved if Canada were to proceed to legislating its key provisions. For example:

“I put these forward as some of the difficulties that will attend the implementation of the Declaration in Canada. I’ve gone through the Declaration looking for specifics that we either do already – quite a few – or which may conflict with other areas of established Canadian law. Article 2, for instance, is more or less done in Canada, although the Indian Act is certainly discriminatory. Article 7(2) may conflict with the UN Declaration on the Rights of the Child, and certainly does with most provincial laws, which put the rights of the individual child ahead of the collective rights of its ethnic group, where those conflict. Article 16(2) says that States should “ensure that State-owned media duly reflect indigenous diversity.” It would be hard to fault the CBC on this, and APTN is the best-kept good secret in the country. But there is a powerful convention that the Government of Canada should not interfere with the editorial decisions of the media. If a new Duncan Campbell Scott should become president of the CBC, does the Government have a positive duty to tell him what to do? Not that this could happen – just as it’s impossible the Republicans could nominate Donald Trump.

“I conclude with the observation that the Declaration contains a lot of high-faluting language; that Canada already meets most of its dicta, if not necessarily legislatively, and that the ambiguities in the Declaration ought to keep otherwise troublesome Parliamentarians fully occupied for decades. The real worry is that the electoral commitments of our new government – implementing UNDRIP and the recommendations of the TRC, a judicial inquiry into the missing and murdered women – may get in the way of more important and practical reforms. With UNDRIP and $2, any indigenous person in Canada can get a cup of coffee.”

UNDRIP and the Leap Manifesto

“Fully implementing” the United Nations Declaration on the Rights of Indigenous Peoples is a central pillar of the Leap Manifesto (see https://leapmanifesto.org/en/the-leap-manifesto/#manifesto-content), a document that is now associated with a movement within Canada’s New Democratic Party. (See for example, “The Leap Manifesto: What is it, and what could it mean for the NDP’s future?” at http://www.theglobeandmail.com/news/politics/leap-manifesto-what-is-it-and-what-could-it-mean-for-the-ndpsfuture/article29583796/, accessed 13 April 2016)

United Nations, Declaration on the Rights of Indigenous Peoples, at http://www.un.org/esa/socdev/unpfii/documents/DRIPS_en.pdf, accessed 7 April 2016.

Wikipedia, Declaration on the Rights of Indigenous Peoples, at https://en.wikipedia.org/wiki/Declaration_on_the_Rights_of_Indigenous_Peoples, accessed 7 April 2016.

Topic and subject with which the concept is primarily associated

This concept is primarily associated with the core normed topic Indigenous Governance in the public management subject of Governance and Institutions.