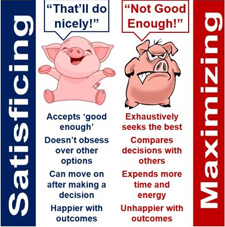 Investopedia (reference below) defines satisficing as “a decision-making strategy that aims for a satisfactory or adequate result, rather than the optimal solution.”

It goes on to say:

“Rather than put maximum exertion towards attaining the most ideal outcome, satisficing focuses on pragmatic effort when confronted with tasks. This is because aiming for the optimal solution may necessitate needless expenditure of time, energy and resources.

“The strategy can include adopting a minimalist approach in regards to achieving the first attainable resolution that meets basic acceptable outcomes. Satisficing narrows the scope of options that are considered to achieve those outcomes, setting aside options that would call for more intensive, complex, or unfeasible efforts to attempt attain more optimal results. The term “satisfice” was coined by American scientist and Noble-laureate Herbert Simon in 1956.”

In its profile of Simon, The Economist (reference below) states:

“Herbert Simon (1916-2001) is most famous for what is known to economists as the theory of bounded rationality, a theory about economic decision-making that Simon himself preferred to call ‘satisficing’, a combination of two words: ‘satisfy’ and ‘suffice’. Contrary to the tenets of classical economics, Simon maintained that individuals do not seek to maximise their benefit from a particular course of action (since they cannot assimilate and digest all the information that would be needed to do such a thing). Not only can they not get access to all the information required, but even if they could, their minds would be unable to process it properly. The human mind necessarily restricts itself. It is, as Simon put it, bounded by ‘cognitive limits’.

“Hence people, in many different situations, seek something that is ‘good enough’, something that is satisfactory. Humans, for example, when in shopping mode, aspire to something that they find acceptable, although that may not necessarily be optimal. They look through things in sequence and when they come across an item that meets their aspiration level they go for it. This real-world behaviour is what Simon called satisficing.

“He applied the idea to organisations as well as to individuals. Managers do much the same thing as shoppers in a mall. “Whereas economic man maximises, selects the best alternative from among all those available to him,” he wrote, ‘his cousin, administrative man, satisfices, looks for a course of action that is satisfactory or ‘good enough’.’ He went on to say: ‘Because he treats the world as rather empty and ignores the interrelatedness of all things (so stupefying to thought and action), administrative man can make decisions with relatively simple rules of thumb that do not make impossible demands upon his capacity for thought.’

“The principle of satisficing can also be applied to events such as filling in questionnaires. Respondents often choose satisfactory answers rather than searching for an optimum answer. Satisficing of this kind can dramatically distort the traditional statistical methods of market research.”