… a core term in Governance and Institutions and Atlas100

Wikipedia (reference below) defines red tape reduction as a reduction of bureaucratic obstacles to action.

“Red tape is an idiom that refers to excessive regulation or rigid conformity to formal rules that is considered redundant or bureaucratic and hinders or prevents action or decision-making. It is usually applied to governments, corporations, and other large organizations. … Red tape generally includes filling out paperwork, obtaining licenses, having multiple people or committees approve a decision and various low-level rules that make conducting one’s affairs slower, more difficult, or both.” 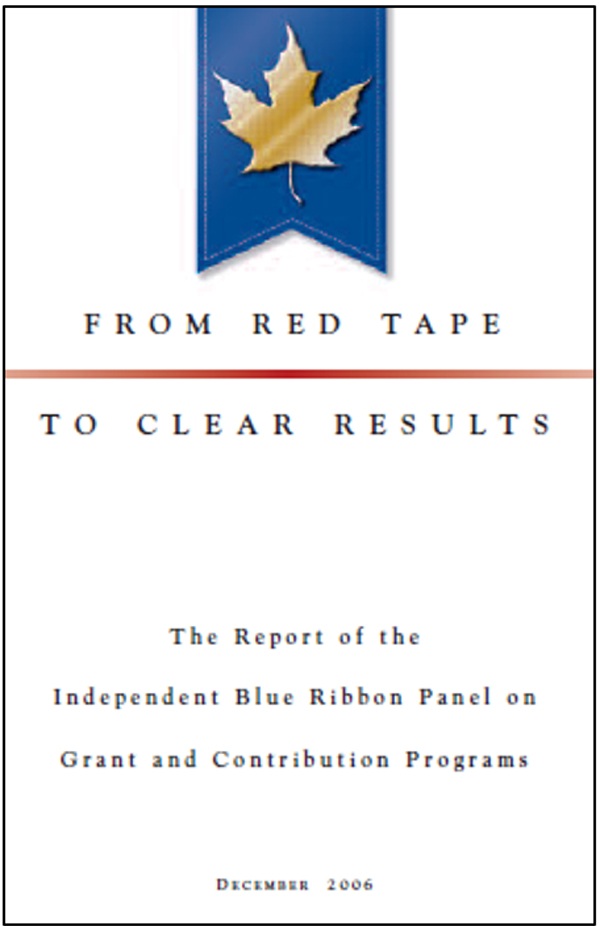 Many governments undertake reforms to improve their operations by reducing red tape. For example, the Government of Canada established an Independent Blue Ribbon Panel on Grants and Contributions Programs (report on right) and a separate regulatory reform process to address regulations affecting business:

“The Government of Canada has made cutting red tape a key priority and as such, is launching a regulatory reform package that is among the most ambitious of its kind today. The Red Tape Reduction Action Plan, the product of business community input to a year-long commission, not only targets specific irritants to businesses, but the systemic barriers that unnecessarily frustrate and burden Canadian business with additional delays, costs and bureaucracy.” (Government of Canada, 2012)

Modernizing Government in Governance and Institutions and Atlas100.

Frances Lankin and Ian Clark (2006), From Red Tape to Clear Results – The Report of the Independent Blue Ribbon Panel on Grants and Contributions Programs, Government of Canada, at http://publications.gc.ca/collections/Collection/BT22-109-2007E.pdf, accessed 16 November 2016.