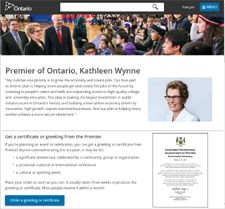 Wikipedia (reference below) says that in Canada, “a premier is the head of government of a province or territory” although “the word is merely a synonym for prime minister, it is employed for provincial prime ministers to differentiate them from the Prime Minister of Canada.”

Wikipedia also notes that the Prime Minister – Premier distinction does not exist in French, with both federal and provincial first ministers being styled premier minister.