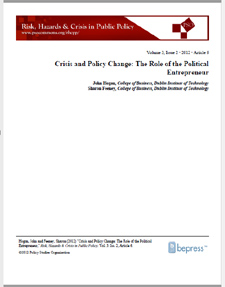 John Hogan and Sharon Feeney (2012, reference below and pdf on right), summarize the role of crises, policy entrepreneurs, and political entrepreneurs in policy change.

“Kingdon (1995) suggests that change agents encompass a broad grouping of what he terms “policy entrepreneurs.” When a policy is in difficulty, due to an exogenous shock for instance, windows of opportunity appear in which policy entrepreneurs challenge the existing paradigm. They present a range of new ideas to replace the ones upon which existing policy is based and in the process vie for the attention of politicians to get their ideas into the policymaking environment. Policy entrepreneurs encompass civil servants, technocrats, academics, economists and interest groups, etc. that engage in policy innovation and have some access to decision makers. …