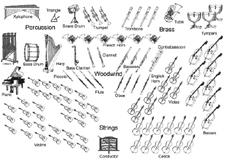 Leslie Pal (reference below) provides a classification of policy instruments, noting that it is “deliberately eclectic” because there is no universally accepted typology, and because most typologies of instruments emphasize different criteria.

“We begin by presuming that the policymaker’s purpose is to achieve an outcome in terms of (1) the behaviour of individuals; (2) political, social, or economic conditions; or (3) services provided to the public. It would be possible to state the latter two in terms of behavioural changes as well; for example, the desired outcome of reducing poverty could be achieved through changed behaviours, such as employers paying higher wages due to increased minimum wage levels or the poor being able to purchase more necessary goods and services because of tax breaks or subsidies.”

The following paragraphs are excerpts from Pal’s Figure 4.1 and the elaboration of his categories (pages 137-148). 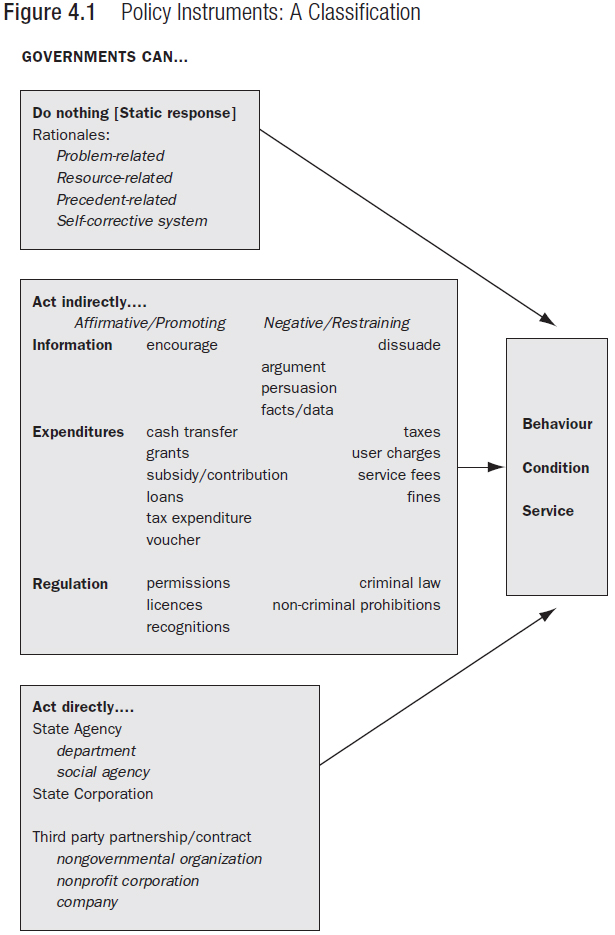 “Doing nothing may appear as a nondecision, which indeed it is if it has no rationale beyond either ennui or a simple desire to remain unengaged. …however, a deliberate choice not to intervene, made after an analysis of the problem, should be considered a policy decision – what we will call here “static response.” There can be several good rationales for declining to intervene. Together, they comprise a coherent set of considerations that should be part of any systematic process of instrument choice, even though doing nothing does not seem intuitively to fit the notion of an instrument or tool. The four rationales that follow presume that a potential problem or opportunity has presented itself to policymakers in some fashion and that a careful analysis was undertaken about the nature of the problem and the appropriate response.

“From the policymaker’s point of view, virtually every policy instrument involves expenditure – even giving a speech will entail the cost of speechwriters and distribution of materials. So money is a ubiquitous and universal resource that governments use to affect policy, and rarely, if ever, can expenditure as an instrument be avoided. The point about expenditure-based policy instruments, however, is that money itself is the direct instrument. In this instance, governments are not trying to achieve their objectives or outcomes by changing the information that undergirds behaviour, but rather the calculus of costs, benefits, and financial resources that individuals or organizations undertake before they do something. Producing Canadian films, for example, is risky because of the high probability of not making a profit due to a small domestic market. Government subsidies and tax breaks can change that equation and encourage more Canadian filmmaking. Canadians who live in poverty and who might not be able to afford a proper diet or housing can be aided through cash transfers in the form of income security or assistance payments. …

“In Figure 4.1 we have distinguished between cash transfers, grants, and subsidies or contributions. In Canadian usage, transfers usually apply to payments by government to individuals or other governments that do not involve any form of exchange and have only minimal conditions attached to them. Equalization payments and the Canada Health and Social Transfer (CHST) are prime examples of cash transfers from the federal government to the provinces. Provincial governments also transfer cash to their municipalities to support a wide range of programs. Old Age Security and the Canada Child Tax Benefit are examples of transfers to individuals. The key point is that a cash transfer tends to be provided for broad support rather than in connection with a specific project or endeavour. Grants, even while they have few if any performance conditions attached, are usually provided in connection with a more specific endeavour (e.g., student educational grants). However, in a technical sense grants tend not to be too closely calibrated to the actual costs of engaging in that endeavour. Contributions and subsidies, on the other hand, have more numerous and detailed conditions, usually demand some measure of performance, and are more carefully calculated to defray some specific proportion of the cost of the endeavour. They differ from loans in that the latter must be repaid. Tax expenditures accomplish much the same thing as contributions or subsidies, but through the mechanism of reducing taxes for specific activities and thereby increasing the benefits. Perhaps the most publicly visible tax expenditure in Canada is the Registered Retirement Savings Program (RRSP), where interest in special accounts is tax free and contributions are tax deductible, though the device is used routinely to support everything from small businesses to investments in high technology and research. … Vouchers are typically “coupons” for stipulated amounts of money that may be redeemed under certain conditions – the best known example is Food Stamps in the United States.”

“Regulation draws on the most fundamental resource a government has: its capacity to command and prohibit. “Regulatory instruments are used to define norms, acceptable behavior, or to limit activities in a given society. … That capacity depends on a blend of legitimacy and effective sanctions for disobedience, with the greatest weight on legitimacy. If governments merely have power without authority, they will have little capacity to command and have citizens obey. It is the legitimacy of their commands as perceived by the majority of citizens that permits them to efficiently use sanctions against the minority that disobey. A great deal of public policy is about achieving outcomes through ensuring certain actions or behaviours. Regulatory instruments rely on rules to prohibit or promote selected actions or behaviours. This technique has an admirable directness to it – “thou shalt” or “thou shalt not” – but we have classified them here under “indirect” instruments since, in most cases, regulation is understood to involve government rules aimed at certain activities undertaken by individuals, organizations, or firms to achieve certain outcomes.”

“The preceding categories of instruments are indirect in that they involve working through citizens or organizations to achieve public goals. Governments can decide to achieve the conditions or service goals they have in mind by marshalling their own resources toward those ends. A good example is education. Parents need to have their children educated, but governments can elect to provide that education directly through a staterun system or to provide parents with the funds (usually through some form of voucher) that they can then redeem for services as they see fit, from either government providers, the private sector, or some mix. Any service directly provided by government, from garbage collection to education, will involve the expenditure of often very substantial amounts of money. In 2009 (latest data), for example, provincial and territorial governments spent a total of $259 billion on health ($115.5 billion), social services ($61.7 billion), and education ($81.8 billion). These combined amounts represented 74 percent of total expenditures of the governments in that year (Statistics Canada, 2009).