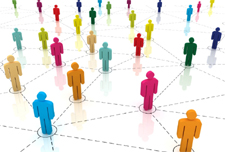 This concept (effective practice) deals with techniques to develop networks that can help advance a public management goal.

The Encylopedia of Small Business (reference below) defines networking as the process of intentionally meeting people, making contacts, and forming relationships in hopes of gaining access to such business-related benefits as career advice, job leads, business referrals, useful information and ideas, and emotional support.

The Scholars at Risk Network (reference below) distinguishes between networking and coalition-building (see Creating a Coalition) as follows:

The Small Business Encyclopedia suggests that successful networking involves making it a personal practice to view every situation – both inside and outside of the business environment – as an opportunity to meet new people. Networking should be viewed as a long-term strategy:

“It is important to keep in touch with new acquaintances and nurture the relationships. It is also helpful to grant favors warmly when they are requested, and to be flexible when asking others for their time, information, advice, or a referral. In addition, merely attending conferences or meetings is not enough to establish and maintain a strong network. Instead, it requires one-on-one time with other people. Another factor in establishing networks is to become an active rather than passive participant in associations, clubs, or groups.

“Networking has its own rules of etiquette that must be followed if it is to be practiced successfully. Most importantly, networking should consist of give-and-take relationships. People who only want to do one or the other quickly lose members from their networks. … people who grant favors should avoid the temptation to keep score or expect an immediate favor in return …  it is [also] important to allow others an occasional opportunity to reciprocate, or else they will become hesitant to ask for help.”

There are hundreds of sites on the internet with tips on effective networking. These include:

Scholars at Risk, Coalition-building and networking, at http://scholarsatrisk.nyu.edu/Workshop/d_strategy_coalition.php, accessed 25 February 2016.