… a core concept in Leadership Skills and Atlas109 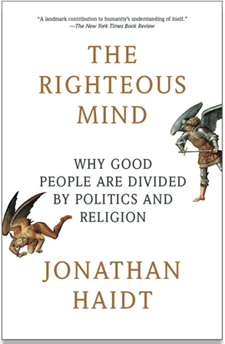 Moral foundations theory tries to explain why morality varies so much across cultures yet still shows so many similarities and recurrent themes.

The theory, developed by Jonathan Haidt and his colleagues, proposes that several innate and universally available psychological systems are the foundations of “intuitive ethics.” Each culture then constructs virtues, narratives, and institutions on top of these foundations, thereby creating the unique moralities we see around the world, and conflicting within nations too.

In the earlier Haidt presentations there are five innate moral foundations; the sixth was added as result of further research. The following descriptions are direct quotes from www.moralfoundations.org.

Haidt and his colleagues apply the theory to political cultures such as those of liberals and conservatives. They suggest that the current culture wars in the United States:

“can be seen as arising from the fact that liberals try to create a morality relying primarily on the Care/harm foundation, with additional support from the Fairness/cheating and Liberty/oppression foundations. Conservatives, especially religious conservatives, use all six foundations, including Loyalty/betrayal, Authority/subversion, and Sanctity/degradation. The culture war in the 1990s and early 2000s centered on the legitimacy of these latter three foundations. In 2009, with the rise of the Tea Party, the culture war shifted away from social issues such as abortion and homosexuality, and became more about differing conceptions of fairness (equality vs. proportionality) and liberty (is government the oppressor or defender?). The Tea Party and Occupy Wall Street are both populist movements that talk a great deal about fairness and liberty, but in very different ways.” (at http://www.moralfoundations.org/, accessed 9 January 2016.)

A note on innateness

On the third page of Chapter 7 of Righteous Mind, Haidt writes:

“It used to be risky for a scientist to assert that anything about human behavior was innate. To back up such claims, you had to show that the trait was hardwired, unchangeable by experience, and found in all cultures. With that definition, not much is innate, aside from a few infant reflexes such as that cute thing they do when you put one finger into their little hands. If you proposed that anything more complex than that was innate—particularly a sex difference—you’d be told that there was a tribe somewhere on earth that didn’t show the trait, so therefore it’s not innate.

We’ve advanced a lot since the 1970s in our understanding of the brain, and now we know that traits can be innate without being either hardwired or universal. As the neuroscientist Gary Marcus explains, “Nature bestows upon the newborn a considerably complex brain, but one that is best seen as prewired—flexible and subject to change—rather than hardwired, fixed, and immutable.”

To replace wiring diagrams, Marcus suggests a better analogy: the brain is like a book, the first draft of which is written by the genes during fetal development. No chapters are complete at birth, and some are just rough outlines waiting to be filled in during childhood. But not a single chapter—be it the one on sexuality, language, food preferences, or morality—consists of blank pages on which a society can inscribe any conceivable set of words. Marcus’s analogy leads to the best definition of innateness I have ever seen:

Nature provides a first draft, which experience then revises. . . . “Built-in” does not mean unmalleable; it means “organized in advance of experience.””

Source: MoralFoundations.org at http://www.moralfoundations.org/, and Chapter 7 of The Righteous Mind: Why Good People are Divided by Politics and Religion, Pantheon Press, 2012, at http://righteousmind.com/wp-content/uploads/2013/08/ch07.RighteousMind.final_.pdf, accessed 9 January 2016.

The Righteous Mind: Why Good People are Divided by Politics and Religion, Pantheon Press, 2012