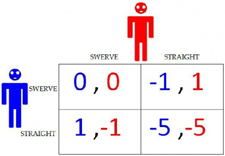 The Economist (reference below) defines game theory as a technique for analysing how people, firms and governments should behave in strategic situations (in which they must interact with each other), and in deciding what to do must take into account what others are likely to do and how others might respond to what they do.

“For instance, competition between two firms can be analysed as a game in which firms play to achieve a long-term competitive advantage (perhaps even a monopoly). The theory helps each firm to develop its optimal strategy for, say, pricing its products and deciding how much to produce; it can help the firm to anticipate in advance what its competitor will do and shows how best to respond if the competitor does something unexpected. It is particularly useful for understanding behaviour in monopolistic competition.

“In game theory, which can be used to describe anything from wage negotiations to arms races, a dominant strategy is one that will deliver the best results for the player, regardless of what anybody else does. One finding of game theory is that there may be a large first-mover advantage for companies that beat their rivals into a new market or come up with an innovation. One special case identified by the theory is the zero-sum game, where players see that the total winnings are fixed; for some to do well, others must lose. Far better is the positive-sum game, in which competitive interaction has the potential to make all the players richer. Another problem analysed by game theorists is the prisoners’ dilemma.”