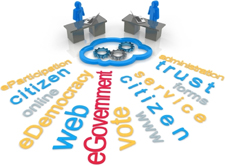 The OECD, reference below, defines digital government as “the use of digital technologies, as an integrated part of governments’ modernisation strategies, to create public value” and that it “relies on a digital government ecosystem comprised of government actors, non-governmental organisations, businesses, citizens’ associations and individuals which supports the production of and access to data, services and content through interactions with the government.”

The OECD’s definition of e-government is similar: “the use by the governments of information and communication technologies (ICTs), and particularly the Internet, as a tool to achieve better government.”

“What has stimulated new thinking, however, is the merging of digital technology and service. As we mentioned earlier, some (Dunleavy et al., 2005) see this as a new public service paradigm. We do not go that far. Many things in government are still delivered in old-fashioned ways, from garbage removal to meals-on-wheels. Moreover, rule-bound bureaucracies are likely to simply shift their rules to be embedded in software as opposed to codes and guidelines in the hierarchy (Fountain, 2001). But, … it is undeniable that the “digital state” is a qualitatively different animal from what preceded it, and that has certain consequences for the organization of government and the delivery of services.

“According to Borins, “The most significant change that could flow from IT-enabled government, however, is a reshaping of the public service that consolidates many common functions previously located separately in each department. Three aspects … are integrated service delivery organizations, joined-up policy development and knowledge management, and integrated support organizations” (Borins, 2007, p. 16). From a service provision perspective, this new IT environment – Web 2.0 governance – adds new channels (Web, email) for citizens to register their preferences and new modes of delivery of services, especially ones that are primarily information based, and new forms of collaboration among public agencies, private and nonprofit organizations, and citizens (Tapscott & Williams, 2006).

“A particularly important development is allowing citizens access to either general information or personal information (e.g., medical records, tax files) that previously would have been available only with great difficulty or not at all. Another development is the sharing of service delivery data in real time with citizens, for example, GPS data on snow removal operations in a city. Within governments, Web 2.0’s enhanced capabilities are allowing (mostly younger) public servants to organize their own communities using blogs, wikis, and social networking tools analogous to Facebook, and most governments are wrestling with how to provide these tools both internally, and in ways that will allow public servants to connect with wider constituencies of stakeholders.”

The OECD report referenced below includes 12 principles to support the development and implementation of digital government strategies that bring governments closer to citizens and businesses.