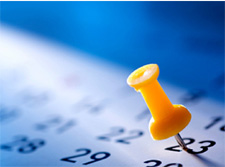 Richard Neustadt (reference below) identified manipulating deadlines as one of the crucial operating skills in public management.

Deadlines are requirements for given sorts of action at set times. Their sources may be dates established in a statute, or agreement, or a promise. Another source is “heat” caused by expectations of performance in a context of events. Since deadlines help to force actions through channels they are to be ridden by those seeking action and ducked by those seeking the opposite. Some deadlines, not all, can be brought into being at will; some can be advanced in time, some can be postponed, some can be strengthened, some weakened, some cancelled, some evaded. Both those who would ride and those who would duck need to figure out when, where, and how these apply.