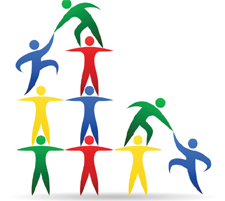 This concept (effective practice) deals with techniques to help create a team.

In the Encyclopedia of Management (reference below) Stephanie Newell and Hal Kirkwood provide the following definition:

“A team is a collection of individuals organized to accomplish a common purpose, who are interdependent, and who can be identified by themselves and observers as a team.”

Newell and Kirkwood note that:

“Teams exist within a larger organization and interact with other teams and with the organization. Teams are one way for organizations to gather input from members, and to provide organization members with a sense of involvement in the pursuit of organizational goals. Further, teams allow organizations flexibility in assigning members to projects and allow for cross-functional groups to be formed.”

In the context of community work, Phil Rabinowitz (reference below) provides the following description:

“A team is a group of people with a commitment to one another, to the team, to a high level of achievement, to a common goal, and to a common vision. They understand that team success depends on the work of every member. A good team functions as a single organism. Not only do members work together toward a common goal, but they complement and support one another so that their work seems effortless.”

Rabinowitz provided the following advice on building a team for community work:

Start with the vision – A team needs a vision to be passionate about. This vision can be developed in a number of ways:

Build team bonds – At the outset, it’s often useful to build cohesiveness through some type of bonding activity appropriate to the nature of the group (e.g., You wouldn’t take a team of seniors on a rigorous wilderness experience.) Some possibilities:

Make sure that the concept of a team is absolutely clear, and that everyone understands what that means for themselves.

Involve the team in jointly planning how it will function and what the team and each of its members will do. The more control team members have over their work, the more likely they are to do it well.

Address personal issues. (This may be an ongoing necessity. It should start at the formation of the team in order to try to resolve issues as early as possible.) Any personal issues that get in the way of the smooth functioning of the team need to be confronted and resolved at the beginning. Some of these can be worked out privately with a single person, while others may need the whole group’s attention. Some common issues to address:

Establish team norms. Teams should be in agreement about the ways members treat one another and how issues are resolved. The team standards should be generated by the team as a whole, and hashed out so that everyone sees them as fair and reasonable. Areas that might be covered include:

Hash out the logistics of working as a team. How does a team work best? Your team needs to establish how it can do its best work. Who’s going to be responsible for what? (Remember that a good team assigns its members the tasks at which they’re most competent.) What kind of meeting, conference, and consultation schedules can you establish to make sure that everyone always knows everything she needs to know? How can you keep team thinking and decision-making dynamic, i.e. able and ready to change a course of action or an idea when needed? All of these and many other questions must be addressed in order for the team to work smoothly and well.

Start the team with a task that is both doable and requires teamwork to accomplish. As in spring training for baseball, this will give people a chance to practice working as a team on something relatively simple. Starting with a success will help cement the team, and give it a positive outlook upon which to base its work.

On a regular basis, go back over both successes and failures to understand what happened and learn for the future. It’s important to look at errors and failures as chances for learning, not occasions for blame.

Provide both individual and team support. Make sure that everyone has what she needs to do her job. Pay attention to team members’ personal needs as well. They’ll work better if they don’t have other things gnawing at them. If they need flexibility because of the needs of small children or elders, make sure they have it. If it will help the team to have food or amusement, or just space available for breaks, see what you can do about accommodating it. If people need resources such as a library, access to particular Internet sites, etc., try to provide it for them. If someone needs an afternoon off, make sure she takes it. In other words, do everything you can to make people happy, comfortable, and functional. It will pay dividends in quality of work life and quality of work for everyone.

Give people something extra for working as a team. You can pay people more . . . if you have the money to. More likely, you can offer them more flexibility, more power over their jobs, a better chance at successfully achieving their shared vision, better working conditions and quality of working life. Whatever it is, offer something to let people know you appreciate what they’re doing.

Reward accomplishments like crazy. Reward the whole team for successes, and reward individuals for particularly good work. You may want to institute a system whereby team members recommend their colleagues for recognition. Use praise unsparingly, and criticism only when it’s absolutely necessary, and your team will accomplish wonders.