… a core concept in Policy Analysis and Process and Atlas101 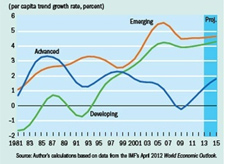 Ashley Crossman (reference below) describes convergence theory as the presumption that “as nations move from the early stages of industrialization toward becoming fully industrialized, they begin to resemble other industrialized societies in terms of societal norms and technology.”

“The characteristics of these nations effectively converge. Eventually and ultimately, this could lead to a unified global culture, if nothing impeded the process.

“Convergence theory has its roots in the functionalist perspective of economics which assumes that societies have certain requirements that must be met if they are to survive and operate effectively.

“Convergence theory became popular in the 1960s when it was formulated by the University of California, Berkeley Professor of Economics Clark Kerr. Some theorists have since expounded upon Kerr’s original premise with the opinion that industrialized nations may become more alike in some ways than in others. Convergence theory is not an across-the-board transformation because although technologies may be shared, it’s not as likely that more fundamental aspects of life such as religion and politics would necessarily converge, though they may.

“Convergence theory is also sometimes referred to as the “catch-up effect.” When technology is introduced to nations still in the early stages of industrialization, money from other nations may pour in to develop and take advantage of this opportunity. These nations may become more accessible and susceptible to international markets. This allows them to “catch up” with more advanced nations.

“Convergence theory is especially important in public policy as many nations join multinational governance structures and follow best practices such as those established by the OECD.”

Image: Quora, Does the Convergence theory in economics actually work in real life or is it essentially just a theory? at https://www.quora.com/Does-the-Convergence-theory-in-economics-actually-work-in-real-life-or-is-it-essentially-just-a-theory, accessed 4 September 2018.