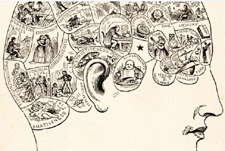 Encyclopedia Britannica (reference below) defines bounded rationality as “the notion that a behaviour can violate a rational precept or fail to conform to a norm of ideal rationality but nevertheless be consistent with the pursuit of an appropriate set of goals or objectives.”

“This definition is, of course, not entirely satisfactory, in that it specifies neither the precept being violated nor conditions under which a set of goals may be considered appropriate. But the concept of bounded rationality has always been somewhat ill-defined in just these respects.

“The American social scientist Herbert A. Simon, an influential proponent of the concept of bounded rationality, used the terms “substantive” and “procedural” to distinguish between the notions of rational behaviour commonly adopted in, respectively, economics and psychology. According to this usage, an agent is substantively rational if he has a clear criterion for success and is never satisfied with anything less than the best achievable outcome with respect to this criterion. For an agent to be procedurally rational, on the other hand, it is necessary only that his decisions result from an appropriate process of deliberation, the duration and intensity of which are free to vary according to the perceived importance of the choice problem that presents itself. The concepts of “procedural” and “bounded” rationality are thus roughly the same, and both are closely related to the idea of “satisficing,” also promoted by Simon.

“Of the numerous attempts to introduce boundedly rational decision making into the social sciences, most fall into one of two categories. The first of these encompasses the work of economic theorists and others who begin with models of optimal behaviour and proceed by imposing new kinds of constraints on the decision maker. For example, boundedly rational agents have been developed who do not always remember the past nor adequately consider the future nor understand the logical consequences of facts that they know. Other theories of this sort add costs of computation to otherwise standard models, and still others allow the decision maker’s cognitive capabilities to depend on the complexity of the choice problem at hand.

“The second category of contributions to the literature on bounded rationality contains work that dispenses with optimal decision making entirely and seeks to construct new models on alternative principles. Writers in this vein speak the languages of neuroscience and evolutionary psychology; stress the impact on human behaviour of emotions, heuristics, and norms; and maintain an especially close dialogue with experimentalists.”