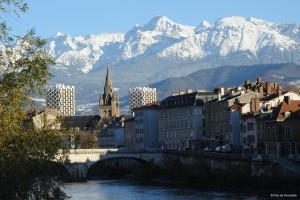 I’ve recently returned from the 1st International Conference on Public Policy (ICPP), held June 26-28 in Grenoble. I’ll discuss the connection between the conference and the Atlas and public management in a moment, but first some background on the conference itself.

Somewhat surprisingly, this is the first stand-alone, international conference on public policy as a field or discipline in itself. Public policy is usually considered a sub-field in political science, and more rarely in economics and in public administration/management. So, there are research committees on public policy in the International Political Science Association, and similar groups in the American Political Science Association and the European Group for Political Research. When these groups meet, there are obviously panels on various aspects of public policy. There is something known as the Interpretive Policy Analysis association that meets annually, but this represents just one approach in the field. The difference with ICPP was that, as one speaker put it, “all the tribes were gathered in one place.”

The conference web site (http://www.icpublicpolicy.org) helpfully has the entire program, and with over 90 panels and some 600+ papers (most available as PDFs on the site) it provides a rich window into the variety of approaches and empirical concerns in the field. Interestingly, the organizers (full disclosure: I was on the organizing committee) expected only about 200 participants, and they got more than 900. This may display as much enthusiasm for Grenoble as it does policy studies, but it says something about the existence of a global epistemic community around policy studies.

Two observations on the conference itself. First, the range of theoretical approaches has not changed or evolved that much over the past decade. The opening plenary was on “approaches” with leading exponents of the major ones, and I felt transported back to my doctoral student days as I was reviewing the literature and getting ready for the comprehensive examination – pretty much the same stuff. Second, it was a remarkably “academic” conference – nary a practitioner could be found in the thicket of eggheads. I heard several comments that it seemed somehow odd that a field that purports to study something practical – the making of public policy – was not itself engaged with practitioners and speaking directly to the policy process. Which brings me to the Atlas.

An interesting question is the relationship between public policy and public management. The Atlas has a domain of policy subjects, and my co-investigator on the project, Ian D. Clark, sees public policy as more or less a subset of public management. He’s experimenting with developing a “map” of the ICPP papers according to the Atlas template to see how much of a fit there is. (See ICPP ResearchMap.) That’s a work in progress, but has yielded some interesting insights, not least of which is that many of the papers seemed to fall comfortably within our mapping scheme.

The larger question of disciplinary boundaries is still pertinent, however. Since ICPP was a public policy conference, few spoke about public management per se. Yet many papers touched on public management issues, not least since public policy is designed and implemented by public authorities. In practical terms, the two disciplines have had different trajectories. Public administration/management has the longer pedigree, going back to the founding of the American Political Science Association in 1903 (of the first eleven presidents of the APSA, five came from the field of public administration). Public policy as a modern field of study can be traced to Lasswell’s work in the early 1950s. Quite naturally, as public policy struggled to find its ecological niche, it strove to distinguish itself from other disciplines, public management included. So, one view is that they are in fact different disciplines. Another is that policy is a subset of management (I haven’t heard anyone argue the opposite). Does this matter, or is it the stuff of harmless debate in faculty clubs (if any faculty clubs still exist)? I can think of one practical implication. If they are different disciplines, then policy people don’t need to know about management, and management people don’t need to know about policy. If they are somehow married (I won’t conjecture on who heads the household), they should get to know each other much better, and not sleep in separate bedrooms.