… an Atlas resource page in Governance and Institutions and Atlas100 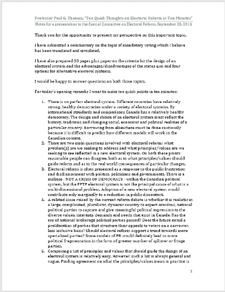 In his presentation to the House of Commons Special Committee of Electoral Reform, Paul Thomas (reference below, pdf on right) offered “The Quick Thoughts on Electoral Reform in Ten Minutes.”

In summary form they are:

Thomas concludes his presentation with:

“In summary a decision on a new electoral system involves consideration of multiple values, a series of potential purposes and a significant measure of uncertainty about how a particular model will work in practice. … I am skeptical about the urgency of electoral reform and the capacity of any system to deliver the multiple benefits that various sincere proponents claim for them. … Electoral reform could wait until after the 2019 election. A committee report and a concrete government proposal could be part of the next election campaign. Meanwhile there is much else to be done on a democratic reform agenda.”

In his presentation, Thomas refers to two other documents made available to the House of Commons Committee. They are:

Paul Thomas (2016), Comparing Electoral Systems: Criteria, Advantages and Disadvantages, and the Process for Finding a Consensus on Which System is Best for Canada, 2 March 2016, uploaded to the Atlas with permission of the author at http://www.atlas101.ca/pm/wp-content/uploads/2016/09/Paul-Thomas-Comparing-Electoral-Systems-2016.pdf, on 25 September 2016.

Paul Thomas (2016), Is Mandatory Voting Right for Canada? Presentation to the Elections Canada Advisory Board, 14-15 September 2016, uploaded to the Atlas with permission of the author at http://www.atlas101.ca/pm/wp-content/uploads/2016/09/Paul-Thomas-Is-Mandatory-Voting-Right-for-Canada-2016.pdf, on 25 September 2016.

Paul Thomas (2016). Ten Quick Thoughts on Electoral Reform in Ten Minutes, Notes for Presentation to the House of Commons Special Committee on Electoral Reform, 20 September 2016, uploaded to the Atlas with permission of the author at http://www.atlas101.ca/pm/wp-content/uploads/2016/09/Paul-Thomas-Ten-Quick-Thoughts-on-Electoral-Reform-in-Ten-Minutes-20-September-2016.pdf, on 25 September 2016.