… one of the Specimen Courses in Governance and Institutions 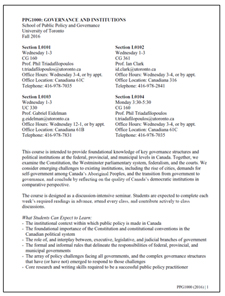 This course is intended to provide foundational knowledge of key governance structures and political institutions at the federal, provincial, and municipal levels in Canada. Together, we examine the Constitution, the Westminster parliamentary system, federalism, and the courts. We consider emerging challenges to existing institutions, including the rise of cities, demands for self-government among Canada’s Aboriginal Peoples, and the transition from government to governance, and conclude by reflecting on the quality of Canada’s democratic institutions in comparative perspective.

By permission of the instructors.

Note 1: The link in the Week number points to the agenda for Section 2’s classes.

The PPG1000 syllabus addresses all the topics in Governance and Institutions except:

Additional description from the Syllabus

The course is designed as a discussion-intensive seminar. Students are expected to complete each week’s required readings in advance, attend every class, and contribute actively to class discussions.

What students can be expected to learn

All assignments will be discussed in class and detailed instructions will be distributed as the course progresses.

Attendance and Engagement (20%): Engagement is measured by actions including but not limited to (a) consistent attendance (one cannot participate if one does not attend); (b) being prepared for class (at a minimum, this means having completed the required readings); (c) being attentive to class discussion; (d) raising thoughtful comments and questions in class; (e) providing insight and analysis to the readings and discussions; (f) attending office hours; (g) bringing relevant news articles and other materials to the attention of the class.

Week 1: Introduction – What is governance? What are institutions? Why study them?

Malcolmson, Patrick, and Richard Myers. 2012. “The Constitution,” in The Canadian Regime: An Introduction to Parliamentary Government in Canada, 5th ed., pp. 13-33. Toronto: University of Toronto Press.

Cappe, Mel, and Janice Stein. 2016. “Government by Referendums is not Democracy.” Globe and Mail, July 8.

Week 5: Institutional Dynamics within Government – What are the relationships between “guardians” and “spenders,” central agencies and departments, the political executive and the civil service, and partisan advisers and public servants?

Savoie, Donald. 2013. “The Machinery: Running on its Tracks,” in Whatever Happened to the Music Teacher?: How Government Decides and Why, pp. 107-126. Kingston: MQUP.

Craft, Jonathan. 2016. Introduction to Backrooms and Beyond: Partisan Advisers and the Politics of Policy Work in Canada, pp. 3-23. Toronto: University of Toronto Press.

Week 6: Federalism – Why is federalism such an important part of policy making in Canada? Why are some policy responsibilities considered exclusively federal or provincial, yet others shared? How has this division of responsibilities changed over time?

Week 7: Federal-Provincial Dynamics – How does federalism structure the substance of policy making? What is meant by “performance” considerations in federalism?

Week 8: Cities in the Federation – How are cities in Canada governed? What do municipal governments actually do? What is the relationship between municipalities and federal/provincial governments?

Week 9: Indigenous Governance – What is Aboriginal self-government? How has the relationship between Aboriginal Peoples and the institutions of Canadian federalism evolved over time? What are the remaining obstacles to recognizing Aboriginal governing institutions?

Week 10: The Courts and the Charter – Do politicians make laws, or judges? What is the relationship between the courts and elected legislatures? What has been the impact of the Charter of Rights and Freedoms on public policy?

Hogg, Peter W. and Allison A. Bushell. 1997. “The Charter Dialogue between Courts and Legislatures (Or Perhaps the Charter of Rights Isn’t Such a Bad Thing after All),” Osgoode Hall Law Journal 35(1):75-124.

Week 11: From Government to Governance – What is governance, as opposed to government? Has the transition to governance strengthened or undermined existing institutions? How can effective and legitimate governance be ensured?

Skogstad, Grace. 2003. “Who Governs? Who Should Govern? Political Authority and Legitimacy in Canada in the Twenty-First Century.” Canadian Journal of Political Science 36(5): 955-974.

Week 12: Judging Canada’s Institutions – How do our institutions perform in comparative perspective? By what criteria?

Heath, Joseph. 2015. “The Forever Campaign: Have Our Politicians Killed Democracy by Being Too Good at Politics?” Ottawa Citizen, August 7.