… a core concept used in Quantitative Methods and Atlas104 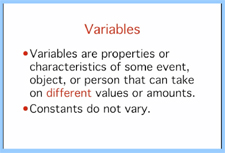 OnlineStatBook (link on right) defines variables as properties or characteristics of some event, object, or person that can take on different values or amounts (as opposed to constants … that do not vary).

OnlineStatBook describes the distinctions between:

“Variables such as number of children in a household are called discrete variables since the possible scores are discrete points on the scale. For example, a household could have three children or six children, but not 4.53 children. Other variables such as “time to respond to a question” are continuous variables since the scale is continuous and not made up of discrete steps. The response time could be 1.64 seconds, or it could be 1.64237123922121 seconds. Of course, the practicalities of measurement preclude most measured variables from being truly continuous.”