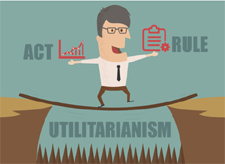 Writing in the Stanford Encyclopedia of Philosophy, Julia Driver (2014, reference below) says that utilitarianism is generally held to be the view that the morally right action is the action that produces the most good.

“There are many ways to spell out this general claim. One thing to note is that the theory is a form of consequentialism: the right action is understood entirely in terms of consequences produced. What distinguishes utilitarianism from egoism has to do with the scope of the relevant consequences. On the utilitarian view one ought to maximize the overall good – that is, consider the good of others as well as one’s own good.

“The Classical Utilitarians, Jeremy Bentham and John Stuart Mill, identified the good with pleasure, so, like Epicurus, were hedonists about value. They also held that we ought to maximize the good, that is, bring about ‘the greatest amount of good for the greatest number’.

“Utilitarianism is also distinguished by impartiality and agent-neutrality. Everyone’s happiness counts the same. When one maximizes the good, it is the good impartially considered. My good counts for no more than anyone else’s good. Further, the reason I have to promote the overall good is the same reason anyone else has to so promote the good. It is not peculiar to me.

“All of these features of this approach to moral evaluation and/or moral decision-making have proven to be somewhat controversial and subsequent controversies have led to changes in the Classical version of the theory.”

“One such criticism is that, although the widespread practice of lying and stealing would have bad consequences, resulting in a loss of trustworthiness and security, it is not certain that an occasional lie to avoid embarrassment or an occasional theft from a rich person would not have good consequences and thus be permissible or even required by utilitarianism. But the utilitarian readily answers that the widespread practice of such acts would result in a loss of trustworthiness and security. To meet the objection to not permitting an occasional lie or theft, some philosophers have defended a modification labelled “rule” utilitarianism. It permits a particular act on a particular occasion to be adjudged right or wrong according to whether it is in accordance with or in violation of a useful rule, and a rule is judged useful or not by the consequences of its general practice. Mill has sometimes been interpreted as a “rule” utilitarian, whereas Bentham and Sidgwick were “act” utilitarians.

“Another objection, often posed against the hedonistic value theory held by Bentham, holds that the value of life is more than a balance of pleasure over pain. Mill, in contrast to Bentham, discerned differences in the quality of pleasures that make some intrinsically preferable to others independently of intensity and duration (the quantitative dimensions recognized by Bentham). Some philosophers in the utilitarian tradition have recognized certain wholly nonhedonistic values without losing their utilitarian credentials. Thus, the English philosopher G.E. Moore, one of the founders of contemporary analytic philosophy, regarded many kinds of consciousness – including friendship, knowledge, and the experience of beauty – as intrinsically valuable independently of pleasure, a position labelled “ideal” utilitarianism. Even in limiting the recognition of intrinsic value and disvalue to happiness and unhappiness, some philosophers have argued that those feelings cannot adequately be further broken down into terms of pleasure and pain and have thus preferred to defend the theory in terms of maximizing happiness and minimizing unhappiness. It is important to note, however, that, even for the hedonistic utilitarians, pleasure and pain are not thought of in purely sensual terms; pleasure and pain for them can be components of experiences of all sorts. Their claim is that, if an experience is neither pleasurable nor painful, then it is a matter of indifference and has no intrinsic value.

“Another objection to utilitarianism is that the prevention or elimination of suffering should take precedence over any alternative act that would only increase the happiness of someone already happy. Some modern utilitarians have modified their theory to require this focus or even to limit moral obligation to the prevention or elimination of suffering – a view labelled “negative” utilitarianism.”

Writing in 9Changes.com, Arushi Dixit provides her analysis of the pros and cons of utilitarianism: