… a core concept in Quantitative Methods and Atlas104 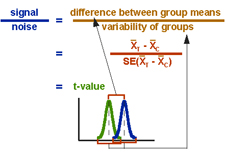 Investopedia (reference below) defines t-test as “an analysis of two populations means through the use of statistical examination; a t-test with two samples is commonly used with small sample sizes, testing the difference between the samples when the variances of two normal distributions are not known.”

“A t-test looks at the t-statistic, the t-distribution and degrees of freedom to determine the probability of difference between populations; the test statistic in the test is known as the t-statistic. To conduct a test with three or more variables, an analysis of variance (ANOVA) must be used. …

“The formula used to calculate the test is a ratio: The top portion of the ratio is the easiest portion to calculate and understand, as it is simply the difference between the means or averages of the two samples. The lower half of the ratio is a measurement of the dispersion, or variability, of the scores. The bottom part of this ratio is known as the standard error of the difference. To compute this part of the ratio, the variance for each sample is determined and is then divided by the number of individuals the compose the sample, or group. These two values are then added together, and a square root is taken of the result.

“For example, consider that an analyst wants to study the amount that Pennsylvanians and Californians spend, per month, on clothing. It would not be practical to record the spending habits of every individual (or family) in both states, thus a sample of spending habits is taken from a selected group of individuals from each state. The group may be of any small to moderate size – for this example, assume that the sample group is 200 individuals.

“The average amount for Pennsylvanians comes out to $500; the average amount for Californians is $1,000. The t-test questions whether the different between the groups is representative of a true difference between people in Pennsylvania and people in California in general or if it is likely a meaningless statistical difference. In this example, if, theoretically, all Pennsylvanians spent $500 per month on clothing and all Californians spent $1,000 per month on clothing, it is highly unlikely that 200 randomly selected individuals all spent that exact amount, respective to state. Thus, if an analyst or statistician yielded the results listed in the example above, it is safe to conclude that the difference between sample groups is indicative of a significant difference between the populations, as a whole, of each state.”

Investopedia, T-Test, at https://www.investopedia.com/terms/t/t-test.asp, accessed 13 May 2018.

Image: Web Center for Social Research Methods, The T-Test, at https://socialresearchmethods.net/kb/stat_t.php, accessed 13 May 2018.