… a core concept in Socioeconomic and Political Context and Atlas105 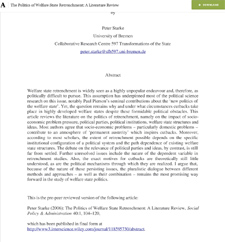 Peter Starke (2006, reference below) describes retrenchment as the willingness “to radically cut back the welfare state.”

“Of course, the word itself was not new, but its interest for welfare state scholars was sparked by the coming into office of Margaret Thatcher in 1979 and of Ronald Reagan in 1981: both willing to radically cut back the welfare state which, in their view, had become a significant source of social and economic problems instead of a solution. To the surprise of many observers, it became clear by the end of the decade that the social policy record of Reagan and Thatcher had not lived up to the high expectations. To be sure there had been some severe cutbacks, yet these did not amount to a complete dismantling of the post-war welfare state. This is what led researchers to look at the underlying political dynamics of these attacks on the welfare state. Moreover, it soon became evident that attempts at retrenchment were by no means confined to the English-speaking world. It seems rather to be a general recurring theme in the ‘post-Golden Age’ social policy of the last 30 years.”

Stark concludes his review with:

“Regarding the explanation of retrenchment, the dust has not yet settled on some fronts. Thanks to Paul Pierson’s seminal research, there is now a consensus that these policies are unpopular and that the ‘politics of blame avoidance’ are a powerful causal mechanism which helps us understand its political dynamics. Moreover, students of welfare state politics would probably agree that, on balance, a large number of veto players tends to inhibit not only the expansion of benefits but also their radical curtailment. Problem pressure is acknowledged as one of the major forces motivating retrenchment, although the impact of domestic pressure seems to overshadow the influence of economic globalization, despite the great attention given to external challenges in the public debate. Much less consensus has emerged on the timing of cuts and the impact of the partisan complexion of government. Are the ‘old politics’ still at work today … [or] have partisan politics entirely changed their meaning, as in Ross or Green-Pedersen? Perhaps the emerging literature on ideational approaches can help complement institutionalist studies? Most probably, the study of retrenchment will remain pluralistic, both in theoretical and in empirical terms.

“A promising way forward would be to continue on two fronts. First , there is still a need for good descriptions and good measurements of the real extent of retrenchment – in cross-national, cross-sectional and inter-temporal perspective. Second , explanatory accounts could be improved by highlighting the motives for retrenchment and the causal mechanisms of retrenchment politics. Interestingly, the first avenue calls for more comparative – perhaps quantitative – data and less idiosyncratic case study work; whereas for the second task, case studies would seem a much better prospect than large-N macro-studies. My guess would be that the study of welfare state retrenchment will continue to be inspired by large-N quantitative work, studies of a single or a handful of well-selected cases – and, hopefully, the combination thereof.”