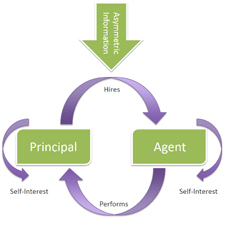 Investopedia (reference below) defines the principal-agent problem as what develops when a principal creates an environment in which an agent’s incentives don’t align with its own.

Investopedia goes on to say:

“Generally, the onus is on the principal to create incentives for the agent to ensure they act as the principal wants. This includes everything from financial incentives to avoidance of information asymmetry.

“The principal-agent problem was first written about in the 1970s by theorists from the fields of economics and institutional theory. Michael Jensen of Harvard’s Business School and William Meckling of the University of Rochester published a paper in 1976 outlining a theory of ownership structure that would be designed in such a way as to avoid what they defined as agency cost and it’s relationship to the issue of separation and control.

“These issues are central to the principal-agent problem. The separation of control occurs when a principal hires an agent, and the costs that the principal incurs while dealing with an agent can be defines as agency costs. These agency costs can come from setting up monetary or moral incentives set up to encourage the agent to act in a particular way.

“An example of how the principal-agent problem occurs between ratings agencies and the companies (the principals) that hire them to set a credit rating. Because a low rating will increase the cost of borrowing for the company, it has an incentive to structure its compensation of the rating agency so that the agency gives a higher rating than what may be deserved. The rating agency is less likely to be objective because it fears losing future business by being too strict.

“A principal-agent problem could just as easily occur if one person, the principle, asks another, the agent, to buy them some ice-cream without the agent knowing the flavor preferences of the principle. While the two may have discussed the pay-rate for purchase and deliver of the ice cream, the number of scoops, whether in a cup, cone, or waffle cone, and the delivery date and time, preference in taste was left out and the agent can’t pick.

“A more common example would be when a person (principal) takes in their car to be serviced by a mechanic (agent). That agent knows more than the typical principle, and the agent has the ability to charge at their own discretion.

“Because so much of the principal-agent problem has to do with information asymmetry and incentives, one of the best ways to protect against an agent acting out of self-interest as opposed to the interest of the principal is to be very intentional about the language of a contract and the types of incentives being laid out.”