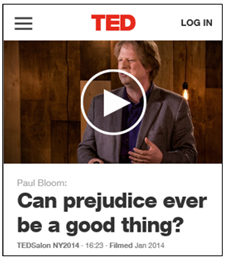 The Cambridge Dictionary defines prejudice as an unfair and unreasonable opinion or feeling, especially when formed without thought or knowledge.

Can prejudice ever be a good thing?

Yale psychologist, Paul Bloom, produced a highly watched TED talk in 2014 (reference below, link on right) with the title “Can prejudice ever be a good thing?”

The value of stereotypes

“So, start with stereotypes. You look at me, you know my name, you know certain facts about me, and you could make certain judgments. You could make guesses about my ethnicity, my political affiliation, my religious beliefs. And the thing is, these judgments tend to be accurate. We’re very good at this sort of thing. And we’re very good at this sort of thing because our ability to stereotype people is not some sort of arbitrary quirk of the mind, but rather it’s a specific instance of a more general process, which is that we have experience with things and people in the world that fall into categories, and we can use our experience to make generalizations about novel instances of these categories. So everybody here has a lot of experience with chairs and apples and dogs, and based on this, you could see unfamiliar examples and you could guess, you could sit on the chair, you could eat the apple, the dog will bark. Now we might be wrong. The chair could collapse if you sit on it, the apple might be poison, the dog might not bark, and in fact, this is my dog Tessie, who doesn’t bark. But for the most part, we’re good at this. For the most part, we make good guesses both in the social domain and the non-social domain, and if we weren’t able to do so, if we weren’t able to make guesses about new instances that we encounter, we wouldn’t survive.

“Or take bias. Now sometimes, we break the world up into us versus them, into in-group versus out-group, and sometimes when we do this, we know we’re doing something wrong, and we’re kind of ashamed of it. But other times we’re proud of it. We openly acknowledge it. … And in fact, in general, people are often swayed by feelings of solidarity, loyalty, pride, patriotism, towards their country or towards their ethnic group. …

“Now some of you may reject this. Some of you may be so cosmopolitan that you think that ethnicity and nationality should hold no moral sway. But even you sophisticates accept that there should be some pull towards the in-group in the domain of friends and family, of people you’re close to, and so even you make a distinction between us versus them.

“Now, this distinction is natural enough and often moral enough, but it can go awry, and this was part of the research of the great social psychologist Henri Tajfel. … And what started his career is an insight that the way most people were thinking about the Holocaust was wrong. Many people, most people at the time, viewed the Holocaust as sort of representing some tragic flaw on the part of the Germans, some genetic taint, some authoritarian personality. And Tajfel rejected this. Tajfel said what we see in the Holocaust is just an exaggeration of normal psychological processes that exist in every one of us.

“And to explore this, he did a series of classic studies with British adolescents. And in one of his studies, what he did was he asked the British adolescents all sorts of questions, and then based on their answers, he said, “I’ve looked at your answers, and based on the answers, I have determined that you are either” – he told half of them – “a Kandinsky lover, you love the work of Kandinsky, or a Klee lover, you love the work of Klee.” It was entirely bogus. Their answers had nothing to do with Kandinsky or Klee. They probably hadn’t heard of the artists. He just arbitrarily divided them up. But what he found was, these categories mattered, so when he later gave the subjects money, they would prefer to give the money to members of their own group than members of the other group. Worse, they were actually most interested in establishing a difference between their group and other groups, so they would give up money for their own group if by doing so they could give the other group even less.

“This bias seems to show up very early. So my colleague and wife, Karen Wynn, at Yale has done a series of studies with babies where she exposes babies to puppets, and the puppets have certain food preferences. So one of the puppets might like green beans. The other puppet might like graham crackers. They test the babies own food preferences, and babies typically prefer the graham crackers. But the question is, does this matter to babies in how they treat the puppets? And it matters a lot. They tend to prefer the puppet who has the same food tastes that they have, and worse, they actually prefer puppets who punish the puppet with the different food taste.“

Combatting prejudice with reason and rules

“Steven Pinker says, the Old Testament says love thy neighbor, and the New Testament says love thy enemy, but I don’t love either one of them, not really, but I don’t want to kill them. I know I have obligations to them, but my moral feelings to them, my moral beliefs about how I should behave towards them, aren’t grounded in love. What they’re grounded in is the understanding of human rights, a belief that their life is as valuable to them as my life is to me…And this principle of impartiality manifests itself in all of the world’s religions, in all of the different versions of the golden rule, and in all of the world’s moral philosophies, which differ in many ways but share the presupposition that we should judge morality from sort of an impartial point of view.

“And we bind ourselves in other ways as well. We know that when it comes to choosing somebody for a job, for an award, we are strongly biased by their race, we are biased by their gender, we are biased by how attractive they are, and sometimes we might say, “Well fine, that’s the way it should be.” But other times we say, “This is wrong.” And so to combat this, we don’t just try harder, but rather what we do is we set up situations where these other sources of information can’t bias us, which is why many orchestras audition musicians behind screens, so the only information they have is the information they believe should matter.

“I think prejudice and bias illustrate a fundamental duality of human nature. We have gut feelings, instincts, emotions, and they affect our judgments and our actions for good and for evil, but we are also capable of rational deliberation and intelligent planning, and we can use these to, in some cases, accelerate and nourish our emotions, and in other cases staunch them. And it’s in this way that reason helps us create a better world.”

Paul Bloom (2014), Can prejudice ever be a good thing?, 16-minute TED Talk at http://www.ted.com/talks/paul_bloom_can_prejudice_ever_be_a_good_thing?  and transcript at http://www.ted.com/talks/paul_bloom_can_prejudice_ever_be_a_good_thing/transcript?language=en, accessed 5 February 2017.