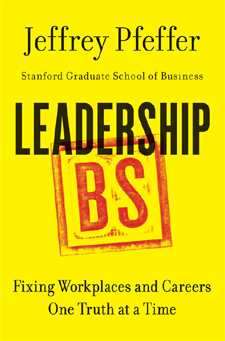 Jeffrey Pfeffer, a professor at the Stanford Business School, provides in his 2015 book a strident critique of what he considers to be the “feel good” descriptions of leaders’ behaviours in most of the popular books on leadership.

In her summary of Pfeffer’s critique, Eilene Zimmerman (reference below) writes:

“Corporate training in the U.S. is a $70 billion market, and 35% of that is spent on management and leadership training. Over the last several decades, the industry has produced a recipe for how to be a successful corporate leader: Be trustworthy and authentic, serve others (particularly those who work for and with you), be modest, and exhibit empathetic understanding and emotional intelligence. But here’s the problem, says Stanford Graduate School of Business professor Jeffrey Pfeffer: None of that is working.”

Zimmerman quotes Pfeffer: “The leadership industry has failed,” he says. “There is little evidence that any of these recommendations have had a positive impact.”

“Pfeffer’s book points to the ways in which those prescriptions have actually been problematic for leaders and proved themselves to be invalid. Many of them come from the inspirational leadership success stories we love. As a culture, we’re fascinated by the legends – think Richard Branson, Steve Jobs, and Mark Zuckerberg – but those are just stories, says Pfeffer, and nothing more. People generally want to see and hear only good things about their leaders, so they tend to ignore contradictory evidence and failures. “There’s all this mythologizing that besets leadership, as people try to generalize and learn from exceptional cases,” he says. “But that has resulted in this enormous disconnect between what actually makes individuals successful and what we think makes them successful.”

“In Leadership BS, Pfeffer argues that one reason the leadership industry has not been successful is that its recommendations are based on an ideal world, rather than on the real world. Among the prescriptions for better leadership, for example, is that leaders need to be truthful, when in reality, the ability to lie can be very useful for getting ahead. Skill at manipulation, writes Pfeffer, “is a foundation of social power.” In fact, he says, there is a reciprocal relationship between power and lying: The powerful deceive more often, and the ability to deceive effectively creates social power.

Writing in the New Yorker, Joshua Rothman (reference below) suggests that the main virtue of leadership books is in encouraging an earnest discussion of virtue:

“In our rationalized world, there isn’t much space for earnest discussion about virtue; the subject of leadership sometimes creates that space. It’s a Trojan horse for a version of moral philosophy. Pfeffer argues that the billions spent on corporate-leadership seminars are a waste of time and money, because they fail to produce better leaders. Yet they may be succeeding as seminars in virtue ethics.”

Rothman says that there is an insatiable demand for new leaders because they help make sense of a complex world:

“To some extent, leaders are storytellers; really, though, they are characters in stories. They play leading roles, but in dramas they can’t predict and don’t always understand. Because the serialized drama of history is bigger than any one character’s arc, leaders can’t guarantee our ultimate narrative satisfaction. Because events, on the whole, are more protean than people, leaders grow less satisfying with time, as the stories they’re ready to tell diverge from the stories we want to hear. And, because our desire for a coherent vision of the world is bottomless, our hunger for leadership is insatiable, too. Leaders make the world more sensible, but never sensible enough.”

The Study of Leadership and Communication (core topic) in Leadership Skills and Atlas 109.