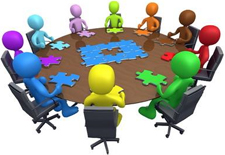 Everyone is given the opportunity to participate, ideas are exchange freely, and discussion is encouraged. While the democratic process tends to focus on group equality and the free flow of ideas, the lead of the group is still there to offer guidance and control. The democratic leader is charged with deciding who is in the group and who gets to contribute to the decisions that are made.

Some of the primary characteristics of participative leadership include:

Strong participative leaders inspire trust among followers. They are sincere and base their decisions on their morals and values. Followers tend to feel inspired to take action and contribute to the group. Good leaders also tend to seek out diverse opinions and do not try to silence dissenting voices or those that offer a less popular point of view.

While participative leadership has been described as the most effective leadership style, it does have some potential downsides. In situations where roles are unclear or time is of the essence, participative leadership can lead to communication failures and uncompleted projects. In some cases, group members may not have the necessary knowledge or expertise to make quality contributions to the decision-making process.

Participative leadership works best in situations where group members are skilled and eager to share their knowledge. It is also important to have plenty of time to allow people to contribute, develop a plan and then vote on the best course of action.

Drawn from Cherry, K. A. What is Democratic Leadership, at http://psychology.about.com/od/leadership/f/democratic-leadership.htm, accessed 30 December 2015.

The Study of Leadership and Communication (core topic) in Leadership Skills and Atlas 109.