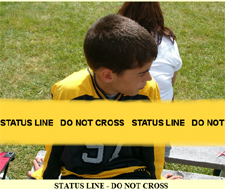 Andrew Siggner and Evelyn Peters (reference below, p. 86), define Non-Status Indians are individuals who identify themselves, culturally, as First Nations people (or North American Indians, which is the term used in the census) rather than as Métis or Inuit, but they are not registered under the Indian Act.

The Statistics Canada (reference below) summarizes data from the 2011 National Household Survey as follows:

Processes that created the category

“The category of “Non-Status Indian” emerged from the combination of definitional acts by the Canadian federal government. “Aboriginal,” the collective term most often used to refer to Indigenous peoples in Canada at this time, obscures tremendous cultural, historical, and legal complexity. The Constitution Act, 1982, identified three groups of Aboriginal people: the North American Indians (most often called “First Nations”); the Métis, who are descendants of Europeans and First Nations people and who established a unique cultural and political regime in western Canada; and the northern Inuit peoples. Adding to this complexity is an additional category created by the Indian Act of Canada, first introduced in 1850 and subject to many subsequent amendments. While the first Indian Acts did not define who was an “Indian,” the Indian Act began, in 1869, to lay out regulations for determining who was “Indian” and, by definition, who had lost that status. Definitions varied as the Indian Act was amended again and again.”

“… There have been many processes, historically, leading to the creation of a category of individuals who, while identifying themselves culturally as First Nations, are not registered under the Indian Act. The most well-known process has to do with clauses introduced in 1869 amendments to the Indian Act that stated that First Nations women who married non-First Nations men would lose their status, and that all of the children from those marriages also would not have Registered Indian status. As noted below, Bill C-31 amended the Indian Act of Canada in 1985 to allow individuals who had lost legal Indian status in this way to apply to regain status. However, many individuals have not taken this route, either by choice or because of impediments in the application process. Registered Indians have also, at various times and with different amendments to the Indian Act, lost or given up their status when they joined various professions, served in the army, lived in another country, wanted to vote, or wanted to buy land. In 1951, the process of creating a centralized registry from the lists held by Indian agents on individual reserves resulted in some families and individuals being left out or removed from the rolls. Finally, there are some groups who consider themselves First Nations, but who never signed a treaty and so are not considered as First Nations people by the federal government. While this is a partial list, it does describe the major routes individuals have taken to fall into the category “Non-Status Indian.”

Non-status as a “state of being”

On her blog (reference below) Pam Palmater writes:

“… Non-Status Indians are those people who identify as Indian (i.e. Mohawk, Mi’kmaq, Cree, Maliseet, etc) but who by choice or legislative exclusion are not registered under the Indian Act as Indians (i.e. they do not have “status”). For many, the term Non-Status Indian is not so much an identity, but a state of being. For example, I am a Mi’kmaq person and have always identified as such. My larger extended family is Mi’kmaq and we have worked our whole lives towards improving the lives of Mi’kmaq and other Aboriginal peoples who live off-reserve and who are treated differently because they lack a residence on reserve and/or because they do not have status under the Indian Act. I was raised to know the community from which my family originated, the traditions and practices of my Nation as well as the people who share the same Mi’kmaq history.

“While I identify as Mi’kmaq, I am also aware that due to gender discrimination in the Indian Act, I am not currently entitled to be a registered (status) Indian, despite the fact that my father was a status Indian and band member at Eel River Bar First Nation in New Brunswick. Therefore, I am a non-status Indian, i.e. a Mi’kmaq who is not registered under the Indian Act. That is my state of being as so decided by a government official at INAC. Some people have asked why I would continue to refer to myself or my situation with such a negative label as Non-Status Indian. My only answer is this: so long as there is a discriminatory federal process that tells me I am a Non-Status Indian, then I have an obligation to use the term, educate people about the term and work towards finally getting rid of the need to even have the term.

“Other terms such as First Nations or off-reserve Aboriginal peoples may include both status and Non-Status Indians. However, the saying “out of sight – out of mind” applies especially to this situation. In my opinion, generic terms tend to hide the fact that Non-Status Indians exist and this creates a lack of awareness about their issues. Non-Status Indians are being discriminated against on the basis of their gender, birth/blood status, and/or marital/family status. Some are denied band membership simply because they do not have status. Many do not qualify for federal programs and services because they lack status. Some are even denied the right to call themselves Cree, Mi’kmaq or Mohawk because some Aboriginal communities have come to associate their identities with federal recognition – i.e. status. These issues affect the quality of life of thousands of us across the country. We need to acknowledge the problem and find solutions.”

“Despite differences in legal status and, arguably, in culture and history between Non-Status Indians and other Aboriginal populations, there is very little to differentiate the socio-economic characteristics between the former and the latter. The Non-Status Indian population has been one of the fastest growing Aboriginal populations in Canada since the 1996 Census. The Non-Status Indian population has continued to grow since 1996, and more quickly than basic demographic growth components (fertility and mortality) would suggest. Underlying this increase is likely a change in how individuals respond to the categories available on census forms. Non-Status Indians are not evenly distributed across different provinces and growth rates vary as well, suggesting that there are different patterns of identification with census categories in different areas of Canada.