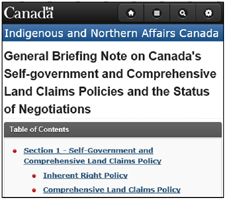 The Government of Canada (reference below, INAC briefing note on right) set out its policy for the settlement of Aboriginal land claims in the 1973 Statement on Claims of Indian and Inuit People.

As noted below, this policy was amended in 1986 and further updated as a result of the 1995 Inherent Right Policy.

Land claims as depicted by ATRIS

Indigenous and Northern Development has developed Aboriginal and Treaty Rights Information System (ATRIS), a web-based, geographic information system that locates Aboriginal communities and displays information relating to their potential or established Aboriginal or treaty rights, at http://www.aadnc-aandc.gc.ca/eng/1100100014686/1100100014687. ATRIS depicts the geographic extent of land claims. As an example, the ATRIS results for the postal code for Denman Island, British Columbia, are illustrated below. 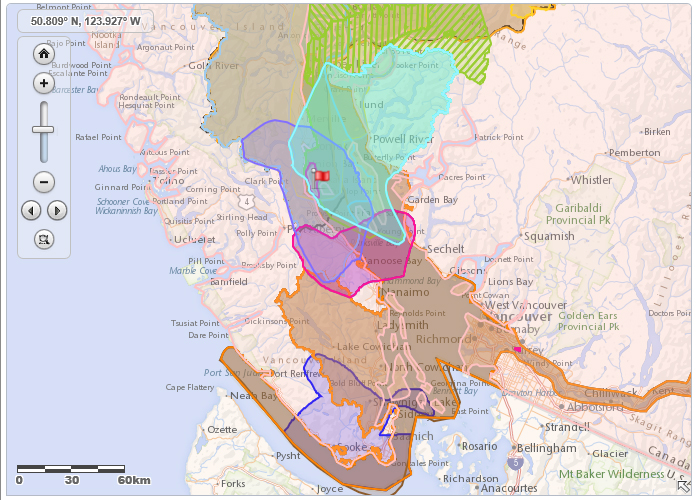 The current description of the Comprehensive Land Claims Policy in the briefing note describe above reads as follows:

“The current Government of Canada policy for the settlement of Aboriginal land claims had its genesis in the 1973 Statement on Claims of Indian and Inuit People. The policy divides claims into two broad categories: specific and comprehensive.

“Specific claims, made by First Nations against Canada, relate to the administration of land and other assets, or to the non-fulfilment of historic treaties.

“Comprehensive land claims are based on the assertion of continuing Aboriginal rights and/or title to lands and natural resources. The Comprehensive Land Claims Policy stipulates that land claims may be negotiated with Aboriginal groups in areas where claims to Aboriginal title have not been addressed by treaty or through other legal means.

“The 1973 Comprehensive Land Claims Policy was reaffirmed in 1981. Its primary thrust was to obtain certainty respecting ownership, use and management of lands and resources by negotiating an exchange of claims to undefined Aboriginal rights for a clearly defined package of rights and benefits set out in a settlement agreement. Section 35 of the Constitution Act, 1982, recognizes and affirms Aboriginal and treaty rights that now exist or that may be acquired by way of land claims’ agreements.

“Significant amendments to the Comprehensive Land Claims Policy were announced in December 1986, following an extensive period of consultation with Aboriginal and other groups. The revised policy improved the negotiation process, allowed for greater flexibility in land tenure, provided a clearer definition of the topics for negotiation and established a requirement for implementation plans.

“The 1986 Policy allowed for the retention of Aboriginal rights on land that Aboriginal people will hold following the conclusion of a claim settlement, to the extent that such rights are consistent with the settlement agreement. Since 1995, Canada has developed new approaches to achieving certainty with regard to lands and resources as an alternative to the traditional approach based on exchange and surrender of Aboriginal land rights. The Nisga’a Final Agreement, which came into effect in 2000, provided for the Nisga’a Aboriginal rights to continue as modified by the treaty.

“Under the Government of Canada’s 1995 Inherent Right Policy, self-government arrangements may be negotiated simultaneously with lands and resources as part of comprehensive claims agreements. The Government of Canada is prepared, where the other parties agree, to constitutionally protect certain aspects of self-government agreements as treaty rights within the meaning of section 35 of the Constitution Act, 1982.

“In the provinces, most of the lands and resources that are the subject of comprehensive claim negotiations are under provincial jurisdiction. Moreover, by establishing certainty of title to lands and resources, claims settlements benefit the provinces. It is the position of the Government of Canada that provincial governments should participate in negotiations and contribute to the provision of benefits to Aboriginal groups.

“Negotiations have generated a significant number of agreements and settlements during the last 30 years and continue to produce innovation in both policy and process. The Government of Canada is committed to a results-based negotiations process that focuses resources on the most productive tables, promotes alternative measures when appropriate, and that streamlines government processes. However, evolving constitutional law, changing public and economic environments, and experience from existing processes have served to identify a range of issues where there is a need to consider renewal of policies and processes for addressing Aboriginal and treaty rights.

“To this end, in July 2014 Canada announced further action to help advance treaty negotiations and reconciliation. An interim Comprehensive Land Claims policy incorporating key updates has been released as a starting point for a national engagement process which will look to identify further reforms to advance negotiations and facilitate reconciliation.”