The Economist describes the invisible hand as Adam Smith’s shorthand for the ability of the free market to allocate factors of production, goods, and services to their most valuable use.

“If everybody acts from self-interest, spurred on by the profit motive, then the economy will work more efficiently, and more productively, than it would do were economic activity directed instead by some sort of central planner. It is, wrote Smith, as if an ‘invisible hand’ guides the actions of individuals to combine for the common good. Smith recognised that the invisible hand was not infallible, however, and that some government action might be needed, such as to impose antitrust laws, enforce property rights, and to provide policing and national defence.”

Why economists love the invisible hand 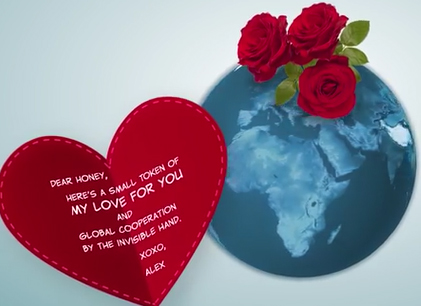 In his video (reference below, link upper right), Alex Tabarrok provides a light hearted description of his love for “global cooperation by the invisible hand” that enables an economist in Chicago to buy roses from Ecuador for his beloved on Valentines day.

Tabarrok calls his video “I, Rose” invoking Leonard Read’s 1958 essay “I, Pencil – My Family Tree as told to Leonard E. Read” (reference below). Read’s pencil asserts that “no single person on earth knows how to make me” and:

“There is a fact still more astounding: the absence of a master mind, of anyone dictating or forcibly directing these countless actions that brought me into being. … Instead, we find the Invisible Hand at work.”