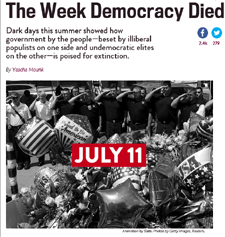 In his Slate cover story, Harvard lecturer, Yascha Mounk, describes a growing tension between what he calls illiberal democracy and undemocratic liberalism.

The rise of illiberal democracy

“Across the affluent, established democracies of North America and Western Europe, the last years have witnessed a meteoric rise of figures who may not be quite so brash or garish as Trump and yet bear a striking resemblance to him: Marine Le Pen in France, Frauke Petry in Germany, Geert Wilders in the Netherlands, and many of the leading Brexiteers in the United Kingdom. They too harness a new level of anger that is quite unlike anything liberal democracies have witnessed in a half-century. They too promise to stand up for ordinary people, to do away with a corrupt political elite, and to put the ethnic and religious minorities who are now (supposedly) being favored in their rightful (subordinate) place. They, too, are willing to do away with liberal political institutions like an independent judiciary or a free, robust press so long as those stand in the way of the people’s will. Together, they are building a new type of political regime that is slowly coming into its own: illiberal democracy.

“Critics often attack Trump, Le Pen, and their cohort for being undemocratic. But that is to misunderstand both their priorities and the reasons for their appeal. For the most part, their belief in the will of the people is real. Their primary objection to the status quo is, quite simply, that institutional roadblocks like independent courts or norms like a “politically correct” concern for the rights of minorities stop the system from channeling the people’s righteous anger into public policy. What they promise, then, is not to move away from popular rule but rather to strip it of its artificial, liberal guise – all the while embodying the only true version of the people’s will.”

The drift toward undemocratic liberalism

“Political elites are understandably terrified by the speed with which illiberal democracy is coming into its own. But if the populists are pushing for a political system that does away with one half of liberal democracy, the truth is that a large number of establishment politicians are increasingly tempted to embrace a system that does away with the other half. Where Trump and Le Pen seek to establish an illiberal democracy, a lot of sensible centrists are quietly seeking their salvation in what I call “undemocratic liberalism.” If the people want to violate the rights of unloved minorities, setting up the prospect of democracy without rights, the political establishment is increasingly insulating itself from the people’s demands, opting for a form of rights without democracy.

“To be sure, undemocratic liberalism usually retains a democratic sheen. The standard rigmarole of political life in a supposed democracy is jealously observed: There are regular elections and hard-fought campaigns, grand speeches and parliamentary votes. The institutional apparatus that supposedly serves to translate the will of the people into public policy remains in place. And yet, the actual purpose of these institutions – to let the people rule – is increasingly forgotten. To anyone who cares to take a skeptical look, it is obvious how ineffectual representative institutions have become at delivering on the noble task they supposedly serve.”

Can the centre regain its conviction?

“… in both Europe and North America, much of the left increasingly thinks of “liberal” as a term of abuse. Indeed, a growing share of left-wing activists has gone from understandable anger at the many shortcomings of the status quo to an outright rejection of the foundational political values of our age. Assuming that ideals that are flagrantly contradicted in practice can’t be worth very much in theory either, they too are giving up on the core tenets of liberal democracy.”

“… And so it is centrist politicians who have now become the last explicit defenders of liberalism. But, squeezed between a blatantly authoritarian right and an increasingly illiberal left, they have begun to seek refuge in new forms of technocratic rule. In the short run, the undemocratic bulwarks they are building against illiberal sentiments are protecting the rights of minorities. But their lack of urgency and the dearth of their vision mean that they do not even attempt to tackle the root causes of the populist rise, like the stagnation in living standards. In the long run, this is very dangerous: The exclusion of the people from the political process – especially when coupled with an unwillingness (or an inability) to pass real economic reform – will only serve to inflame illiberal passions, turning even more citizens against liberal democracy.”

And he concludes with a call to action:

“To fight the terrorists and the populists, to prevail both against the plotters of undemocratic coups and the illiberal tribunes propelled into office by the intense anger of a volatile age, will require liberal democrats to stand tall for their values – and to develop the radical imagination that is desperately needed if we are to recreate the conditions that once allowed for the system’s stability. New economic policies are needed to ensure that ordinary people capture much more of the world’s economic gains than they have in the past decades. Meanwhile, democratic institutions designed for the 18th century need to restore the promise of popular rule by incorporating the technologies of the 21st century.

… The question is no longer whether we can preserve our political order in its current form. (We probably can’t.) It is what reforms are needed to ensure that the precious, fragile combination of liberalism and democracy does not entirely vanish from the face of the earth. If the center is to hold – if we are to rescue what is best about our imperfect political order – a lot will have to change.”