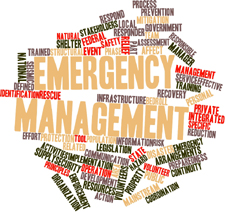 Leslie Pal (reference below) defines emergency management as “the process of developing and implementing policies and programs to avoid and cope with the risks to people and property from natural and man-made hazards” (p. 343).

“Managing emergencies might, at first blush, appear to be a contradiction. In times of emergency or disaster, public and private authorities are put to the ultimate test. The public interest always appears abstract and distant when discussed in terms of broad policy or hypotheticals. However, when a bridge collapses, when forest fires rage, when terrorists strike, or when financial markets implode, there is a clear and present imperative for governments to act. They need to show that in some way they were prepared, that they can deal with the emergency, and that they will manage the aftermath. …

“Obviously, there has been a response function in government as long as government has been around – to fires, medical services, disaster relief, and crime. But the field of emergency management has emerged only in the last 20 years as a distinct area of public administration. It has taken on even greater importance since 9/11 and subsequent terrorist attacks in Madrid and London, as well as natural disasters such as floods and earthquakes. The possibility of deliberate and calamitous damage to life and property has increased exponentially in the last few years. Emergency and crisis are now much more closely aligned – something that, at one time, might have been a mere emergency, if the result of a terrorist attack – could become a crisis that challenges the entire political and economic system.

“There have been several challenges to emergency management in the past. One is that most emergencies conventionally occur “on the ground” – that is, they require a response from local governments and communities. This expectation places a huge burden on levels of government that are not usually well endowed with funds and personnel. The second traditional problem is that many emergencies are low-probability events. In the normal course of things, people try to avoid the hazards that lead to emergencies. However, while the probability is low, the consequences can be severe. So there is a compulsion on the part of governments to prepare for possible emergencies, but not much of a public constituency pushing for that response or lobbying for it. There is also a psychological bias to underestimate broadly based risk and a commensurate reluctance to pay the taxes required to deal with it. This bias has changed completely since 9/11. There is a much heightened sense of the possibilities of deliberate danger, and the pummelling that Canada and other countries have received through emergencies such as mad cow, SARS, H1N1, and natural disasters has driven home the importance of preparation and the importance of having the capacity to deal with threats.”

Threat events can be categorized as follows (p. 326): 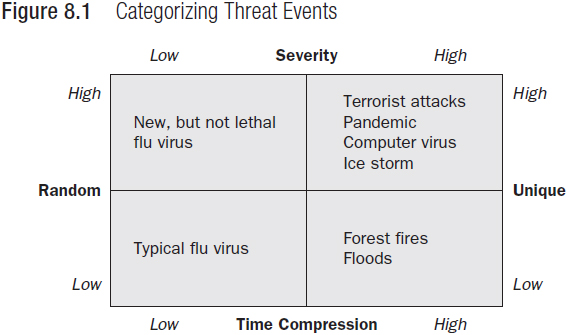 Pal notes (p. 326) that the standard framework for emergency management has four phases or elements:

Managing Risk (core topic) in Implementation and Delivery and Atlas107.