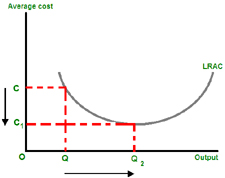 The Economist defines economies of scale as bigger is better.

“In many industries, as output increases, the average cost of each unit produced falls. One reason is that overheads and other fixed costs can be spread over more units of output. However, getting bigger can also increase average costs (diseconomies of scale) because it is more difficult to manage a big operation, for instance.”

“In microeconomics, economies of scale are the cost advantages that enterprises obtain due to size, output, or scale of operation, with cost per unit of output generally decreasing with increasing scale as fixed costs are spread out over more units of output.

“Economies of scale often have limits, such as passing the optimum design point where costs per additional unit begin to increase. Common limits include exceeding the nearby raw material supply, such as wood in the lumber, pulp and paper industry. A common limit for low cost per unit weight commodities is saturating the regional market, thus having to ship product uneconomical distances. Other limits include using energy less efficiently or having a higher defect rate.

“Large producers are usually efficient at long runs of a product grade (a commodity) and find it costly to switch grades frequently. They will therefore avoid specialty grades even though they have higher margins. Often smaller (usually older) manufacturing facilities remain viable by changing from commodity grade production to specialty products.”